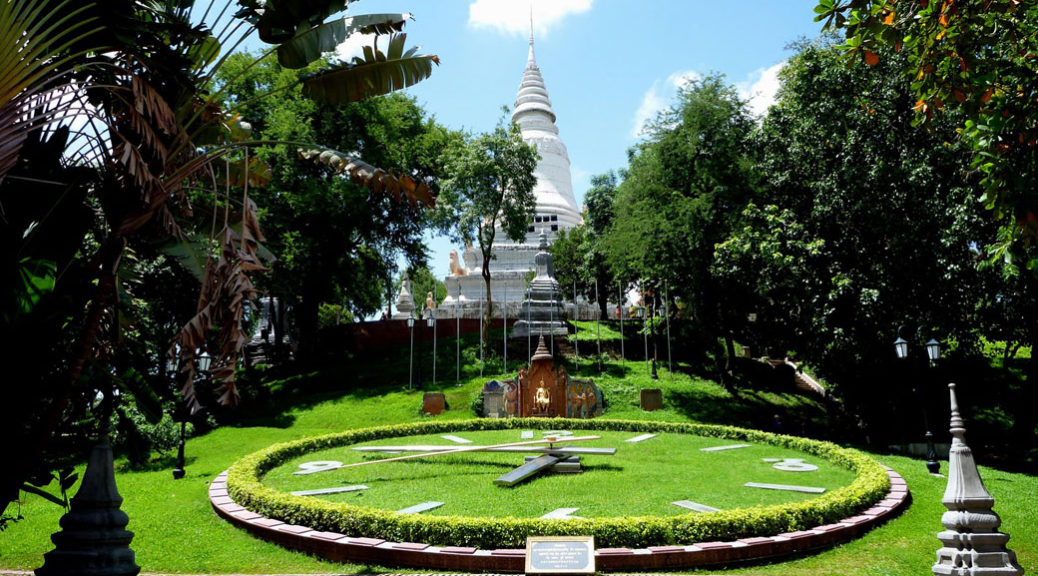 Set on top of a tree-covered knoll 27m high,  Wat Phnom is the only hill in town. According to legend, the first pagoda on this site was erected in 1373 to house four statues of Buddha deposited here by the waters of the Mekong and discovered by a woman name Penh. The main entrance to Wat Phnom is via the grand eastern staircase, which is guarded by lions and naga (snake) balustrades.

Today, many people come here to pray for good luck and success in school exams or business affairs.  When a petitioner’s wish is granted, he or she returns to make the offering (such as a garland of jasmine flowers or bananas, of which the spirits are said to be especially fond) promised when the request was made.

Wat PhnomThe vihara (temple sanctuary) was rebuilt in 1434, 1806 , 1894, and, most recently, in 1926.  West of the vihara is an enormous stupa containing the ashes of King Ponhea Yat (reigned 1405 to 1467) .  In a small pavilion on the south side of the passage between the vihara and the stupa is a statue of the smiling and rather plump Madame Penh.

A bit to the north of the vihara and below it is an eclectic shrine dedicated to the genie Preah Chau, who is especially revered by the Vietnamese.

On either side of the entrance to the chamber in which a statue of Preah Chau sits are guardian spirits bearing iron bats.  On the tile table in front of the two guardian spirits are drawings of Confucius, and two Chinese-style figures of the sages Thang Cheng (on the right ) and Thang Thay (on the left).  To the left of the central altar is an eight-armed statue of Vishnu.

Down the hill from the shrine is a royal stupa sprouting full-size trees from its roof.  For now, the roots are holding the bricks together in their net-like grip, but when the trees die the tower will slowly crumble.  If you can’t make it out to Angkor, this stupa gives a pretty good idea of what the jungle can do (and is doing) to Cambodia’s monuments.

Curiously,  Wat Phnom is the only attraction in Phnom Penh that is in danger of turning into a circus.  Beggars, street urchins, women selling drinks and children selling birds in cages (you pay to set the bird free locals claim the birds are trained to return to their cage afterwards) pester everyone who turns up to slog the 27m to the summit.  Fortunately its’ all high-spirited stuff, and it’s difficult to be annoyed by the vendors, who after all, are only trying to eke out a living.