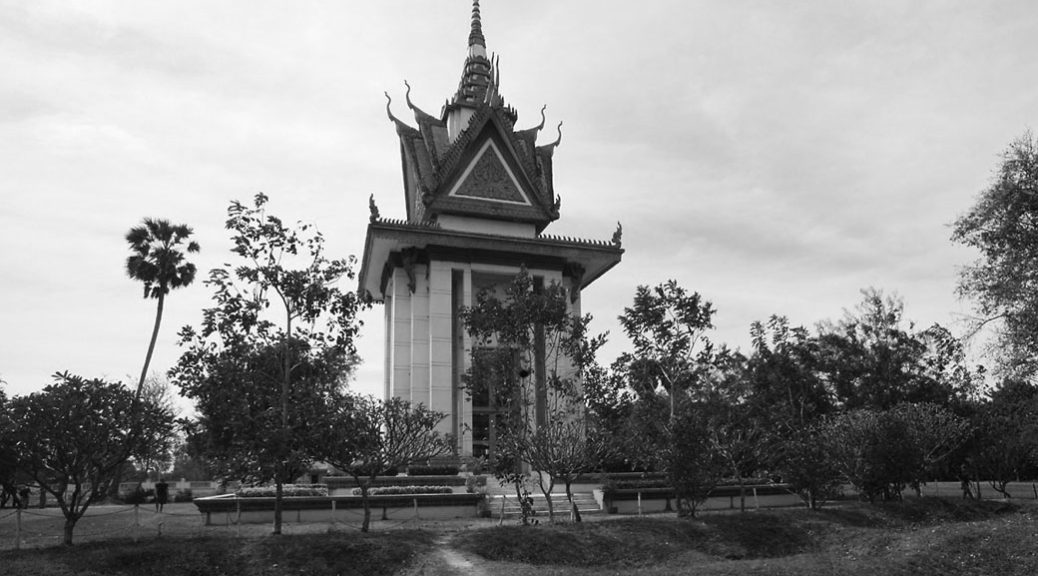 Between 1975 and 1978,aabout 17,000 men, women, children and infants (including nine westerners), detained and tortured at S-21 prison (now Tuol Sleng Museum), were transported to the extermination to death to avoid wasting precious bullets.The remains of 8985 people, many of whom were bound and blindfolded, were exhumed in 1980 from mass graves in this one-time long an orchard; 43 of the 129 communal graves here have been left untouched.

Fragment of Human bone and bits of cloth are scattered around the disinterred pits. Over 8000 skulls, arranged by sex, are visible behind the clear glass panels of the Memoral Stupa, which was erected in 1988.The Killing Fields of Choeung Ek are 15 km from Central Phnom Penh. To get there, take Monireth Blvd south-westward out of the city from the Dang Kor Market bus depot. The site is 8.5 km from the bridge near 271 St. A memorial ceremony is held annually at Choeung Ek on 9 May.

Killing Fields of Cheung Ek is situated 15 kilometers south-west of Phnom Penh and made famous by the film of the same name “Killing Field”. it was a place where more than 17,000 civilians were killed and buried in mass graves; many of them transported here after detention and torture in Toul Sleng. This place is a chilling reminder of the brutalities of the genocidal Khmer Rouge regime. In the center of the area is a 17 story glass stupa which houses 8000 skulls exhumed from mass graves. Open daily.Note: Both Tuol Sleng Museum and the Killing Fields exhibits may be disturbing for some and aren’t suitable for younger children and adults who are easily shocked.

The Cheung Ek genocide museum is located in Cheung Ek commune, Dankoar district, about 15 km from the centre of Phnom Penh. This is the location where the Khmer Rouge took their prisoners for execution. The prisoners were made to wait here for 24 hours before they were killed by a blow to the head after which their throats were slit. Babies were killed by bashing their heads against a tree. There were separate graves for men, for women and for children. Former friends of Pol Pot who were executed here had separate graves too.Visitors can walk along 86 mass graves from which the remainders of 8,985 men, women and children were unearthed after the liberation of the Khmers Rouges. Some of those skulls, bones and pieces of clothing are now kept in the nearby massive stupa.

There were killing fields all over the country, but Cheung Ek was believed to be the largest every year on the 20th of May a ceremony is held around the stupa to bring peace to the spirits of the deceased.Sightseeing in Phnom Penh gives the tourists ample opportunity to visit the numerous places in and around the city. Cheung Ek Killing Field in Phnom Penh is a very important place in the city as it has a long history attached to it. The place is really fascinating for all those coming to visit the city. The place has a long history behind it and reminds one of the horrifying times that the people of Cambodia have gone through during the reign of Khmer and after.

The Cheung Ek Killing Field at Phnom Penh is one of the most prolific and historic place in Phnom Penh and stands a cruel reminder of the atrocities inflicted upon the masses of Cambodia. The place has become very popular now as it is the center of all killings which took place in the city and later got christened as the famous Killing Field. The place is really popular as tourists from all over the world come here. The place has really direct links with the horrific past of Cambodia and Phnom Penh.

The Democratic of Kampuchea was led by Pol Pot, a former schoolteacher. The killing machine of S-21 was a secret prison for torturing, interrogating, and depriving those who were accused of illegal activities and accused of being traitors. The Khmer Rouge acted like savage animals with no conscience as they preyed upon the innocent and naive citizens. The Khmer Rouge had turned the peaceful and beautiful Cheung Ek village into the infamous and miserable killing fields. The Pol Pot regime slaughtered people in the thousands without mercy and buried them in mass graves. No matter how much visitors have read or been told about the Khmer Rouge brutality and the number of people killed all visitors shall understand the full process of how the tens of thousands prisoners were executed here. More importantly, visitors can learn about the chain of command established by Pol Pot.

Given the way that the Ultra Khmer Rouge Regime was organized, a decision for murder was most likely ordered by ?Brother Number 01 himself, Pol Pot. Everything had to meet with his approval, even thoughthere is no written proof. However, Son Sen, who was responsible for National Security and Defense and Ducha commandant at S-21, were directly responsible for killing the prisoners at S-21 and Cheung Ek Killing Field and written proof is available. At S-21 there were many documents routed to the party center and they all passed through Son Sen?s hands. Dozens of memoranda addressed to him by Duch have survived. Duch?s queries and annotations have appeared on the prisoners? confessions, often in red ink. More often, Duch denigrated what the prisoners confessed and suggested beatings and tortures to unearth truth that he thought the prisoners were hiding. These documents display how the Upper Brothers, Son Sen and Duch, were responsible for the thousands of prisoners’ murders at S-21 and Cheung Ek.

After getting an instruction to kill from the Central Committee of the regime through Son Sen, Duch ordered his deputy, Hor, to produce a “must smash” list .Taking orders from Hor, and Suon Thy who were in charge of the documentary unit, the list was prepared. The list was submitted to Duch for his signature. Then, the signed list was sent to Peng, the head of Defense unit, who seems to have been demoted in 1978 when his duties were taken by Hyu. Peng had the keys to all of the cells in the S-21 prison. Based on the list, Peng ordered the guards to remove the “must smash” prisoners to be killed.

The Important and special prisoners like Keo Meas ( a veteran revolutionary), Ney Saran ( Secretary of Agriculture), Hu Nim ( Minister of Information), Kuy Thuon ( Secretary of Northern Zone), Cheng An (Deputy Minister of Industry), Von Veth ( Deputy prime Minister), and foreigners were killed and buried at the S-21 prison. As for foreigners including Canadians, Americans, Australians and British, guards were ordered to kill them and to burn their dead bodies so that no bones were left (Nic Dunlop 2005:275).

The majority of the victims were trucked out to Choeung Ek, at about 8 or 9 o?clock PM, to be killed. The guards took the prisoners from their cells to the main gate where a large truck waited and told them that they were being transferred to another place. This lie was created to prevent the prisoners from crying, refusing to go or from escaping. In order to be well prepared for execution, a messenger from the defense unit was sent to the Choeung Ek Killing Field in advance to inform a permanent team about the number of the prisoners to be killed that day. Usually, the messenger went to the Killing Field by motorcycle in the mornings. To ensure that a top secret was kept and also that the execution was carried out properly, Duch, Peng, and Huy were requested to attend by Son Sen, the Minister in charge of defense and security. Often times, Duch sat smoking on a mat near the pit to supervise the executions and to insure their murderous plans.

The number of prisoners executed at Choeung Ek on a daily basis varied from a few dozen to over three hundred. The latter figure was recorded in May, 1978 at the height of the pursuits in the Eastern Zone. On a monthly basis two or three trucks would go from S-21 to Choeung Ek. Each truck held three or four guards and twenty to thirty frightened, silent prisoners. When the trucks arrived at the site, two guards seated with prisoners jumped from the canvas and took prisoners down, shoved them into a small building. The building was constructed from wood with a galvanized steel roof and its walls were built with two layers of flat wood to darken the room and also to prevent prisoners seeing each other. Then, with the electricity light supplied by a generator , Peng or Huy the heads of capturers subunit, verified prisoners? names against a “must-smash” list prepared by the head of documentation unit, Suos Thy. This list ensured that no one prisoner was missed. Prisoners were led in small groups to ditches and pits that were dug in advance by another team stationed permanently at the site.

They were told to kneel down and then they were clubbed on the neck with tools such as cart axle, hoe, stick, wooden club or whatever else served as a weapon of death. They were sometimes stabbed with knives or swords to save using bullets, which were deemed to be too expensive. Duch said: ?We had instructions from the party on how to kill them, but we didn?t use bullets and usually, we slit their throats. We killed them like chickens? ( Dunlop 2005:273)Him Huy, who took the prisoners to be killed at Choeung Ek recalled,?They were ordered to kneel down at the edge of the hole. Their hands were tied behind them. They were beaten on the neck with an iron ox-cart axle, sometimes with one blow, sometimes with two… ? (David Chandler 1999:140).

Soon after prisoners were executed, the head of inspectors made sure that no one was alive. According to a witness who came to Cheung Ek just 2 days after liberation day, January 7th, 1979, said that at the site there was a small hut with chemical substances. He guessed that executioners scattered these substances over the dead bodies of the victims after execution. This action might have served two purposes: first, to eliminate the stench from the dead bodies which could potentially raise suspicion among people working near the Killing Fields and secondly, the chemicals would have killed off victims who were buried alive. Unfortunately, these poisonous substances were lost in 1979.

Kong San, an ex-Khmer Rouge soldier of 703 division, recalled at that time he had grown rice near Cheung Ek and when the wind blew strongly sometimes he smelt a stench. He thought the smell was just the stench of decomposing dead pets. But after the Khmer Rouge regime was toppled, he found out that Choeung Ek was a Killing Field (From winner to self- destruction 2000: 142).At the end, when the execution was completely finished, the killers washed their body and killing tools in a ditch near the site. The list at Choeung Ek was submitted to Suos Thy, to double-check that no prisoners was missed.